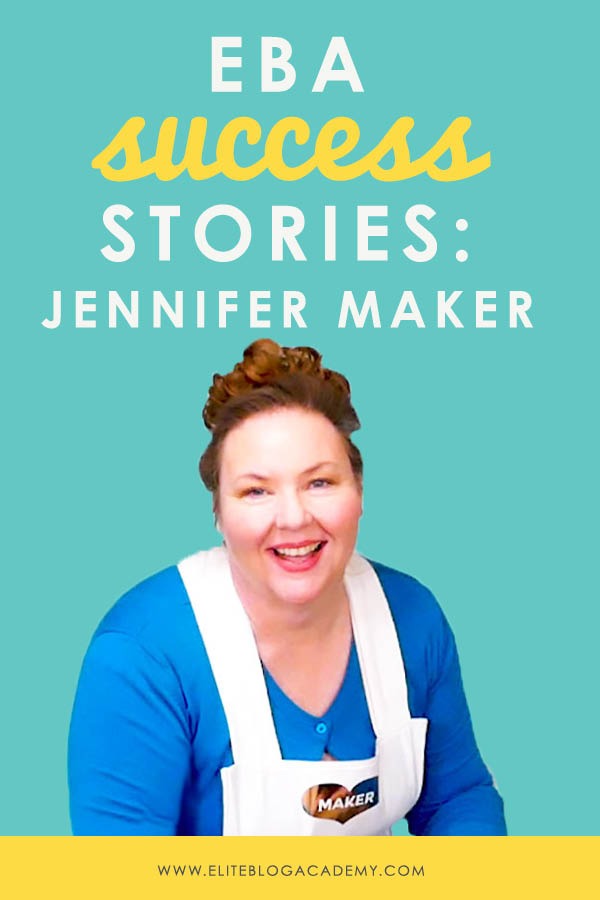 OUR STUDENTS SAY IT BEST

Since first opening our doors in 2014, Elite Blog Academy® has coached nearly 10,000 students in 60 countries around the world. In that time, our students have seen incredible results, from creating six and seven-figure businesses, to securing major book deals, incredible brand partnerships, and national media coverage.

OUR STUDENTS SAY IT BEST

Since first opening our doors in 2014, Elite Blog Academy® has coached more than 10,000 students around the world. In that time, our students have seen incredible results, from creating six and seven-figure businesses, to securing major book deals, incredible brand partnerships, and national media coverage.

FROM BROKE TO BOOMING

“Elite Blog Academy tuition was the BEST money I have ever spent.”

FROM TEEN MOM TO CEO

“I signed up and immediately knew it was the best thing I had ever spent money on.”

“Thanks to EBA®, I can spend my time doing the right things in the right order at the right time in order to continue moving my business forward.”

FROM DEBT TO FINANCIAL LEADERS

FROM NEWBIE TO BREADWINNER

“I honestly think this would have been too scary to me to try had I not had the overall plan and steps that EBA® provides.”

FROM FIGHTING TO FULL TIME MINISTRY

“We wish we knew about EBA much sooner. It would have saved us time and money had we done it right the first time.”

FROM WORKING HARDER TO WORKING SMARTER

“I now put in approximately half the hours for 70% more income.”

FROM HURTING TO HEALING

“People need your message. No matter who you are, or where you come from, you really are unique.”

FROM AIMLESS HOBBY TO SUCCESSFUL BRAND

“You’ll be surprised at the results you make in just a couple of months.”

FROM DEPRESSED TEACHER TO THRIVING RETIREMENT

“I retired 5 years early – my blog income has exceeded my retirement income! I know I’m gonna make it.”

“If you want your life to look different than it does today, EBA can give you that freedom”

FROM NO BIG DEAL TO BOOK DEAL

“EBA® paved the way for me to build a platform, get a book deal, make a full time income and even allowed for my husband to quit his full time job!”

FROM STUCK TO SUPERSTAR

“Elite Blog Academy has pushed me into a place of knowing where to go.”

FROM BLOG TO BUSINESS

“EBA changed my life.  Even if you are living paycheck to paycheck, it’s worth it.”

“If you want to make your blog a success, it is worth the money”

FROM BEGINNER TO GROWING BLOG

“Since I signed up, EBA has been like a compass whereas before I always felt lost”

FROM LOCAL COWBOYS TO ONLINE LEADERS

FROM FAMILY FARM TO GROWING BUSINESS

“Ruth’s approach with EBA is like your best friend coming alongside you…who wants to come and help you walk through a process.”

FROM UNCERTAIN TO CONFIDENT WRITER

“EBA is the one huge purchase I don’t look back at and cringe.”

FROM UNFOCUSED TO COMPLETE FREEDOM

“I will never have to go back to a corporate job.”

FROM BLOG READER TO MONEY MAKER

“Basically Ruth’s the real deal! And so is EBA!”

FROM DREAMER TO DREAM HOMESTEAD

“We don’t want to just make money–we want to have purpose and meaning [and that’s why we blog].”

FROM ENGINEER TO SUCCESSFUL STAY-AT-HOME MOM

“EBA is the best thing that has ever happened in the blogging world.”

FROM FRUSTRATED MOM TO BLOGGING CAREER

“Going through the course was so hard… but EBA gives you the framework and how to find the path to do it.”

FROM MOM TO BUSINESS BUILDER

FROM SELF-SABOTAGE TO CLEAR FOCUS

“Even if you are on the fence even just a little bit, you should really consider EBA.”

FROM STESSED LAWYER TO LOVING LIFE

“EBA is not magic, but magical things happen when you do the work.”

FROM FRUSTRATED TO PASSIONATE

“Elite Blog Academy® is not a course… it’s like a coaching guide.”

FROM OVERWHELM TO DREAMS COME TRUE

“Within 6 months of starting the class, my blog growth tripled.”

FROM DAD TO HEAD OF THE DAD CREW

“It’s the greatest playbook there could ever be about blogging.”

FROM CHASING PAGEVIEWS TO PROVIDING VALUE

“Ruth helped me figure out how to deliver more value to my audience.”

FROM FEELING STUCK TO MAKING AN IMPACT

FROM CHRONIC ILLNESS TO CHANGING LIVES

“I never in a million years thought this was something I could do. Ruth has given me that confidence.”

“I learned that running a profitable blog isn’t magic.”

FROM SCATTERED TO SWEET SPOT

“Ruth helped me make the mindset shift to understand that earning money from my blog is not selling out.”

“I want a path and I want to know what is going to be right and EBA and Ruth do that.”

FROM CONFUSED GRAD TO PURPOSE-FILLED

“It is an all encompassing course. It will take you from the most beginner to the most advanced.”

FROM OVERWHELMED MOM TO INSPIRED AUTHOR

“It helped me believe in myself.”

“There is absolutely no doubt that EBA will change your life.”

FROM TIMID DREAMER TO DETERMINED DOER

“Get education from those who have gone before you and have proven that what they’ve done works.”

FROM UNSURE TO THE PURSUIT OF AWESOME

“It’s worth the investment to be able to take that step to pursue your dream.”

FROM NURSE TO DIY HOME BUSINESS

FROM RUNNING RAGGED TO RUNNING SMOOTH

“I was in a hole and couldn’t find my way out. EBA® was like the ladder I needed to climb my way to the top so I could reach new heights with my blog.”

FROM BURNED OUT TO FARMWIFE ON FIRE