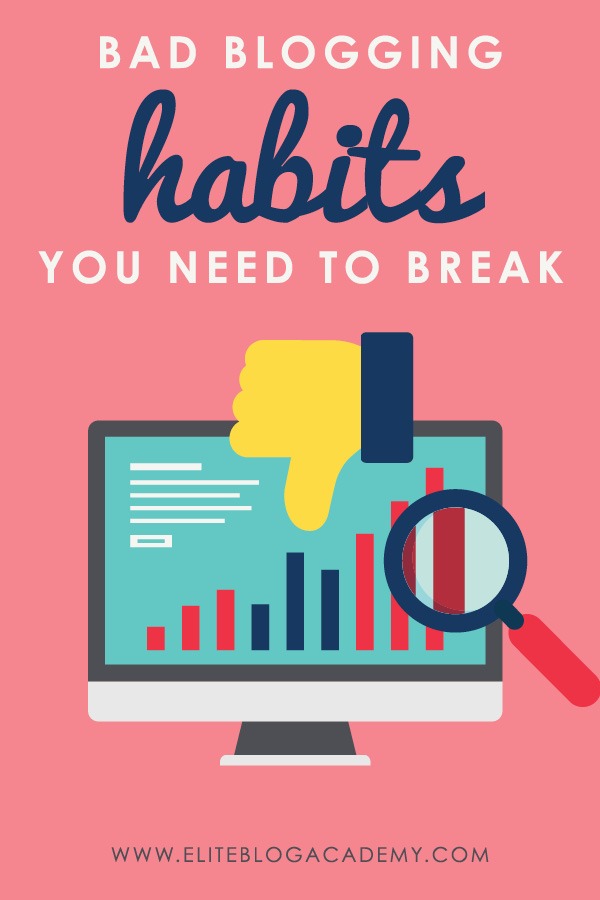 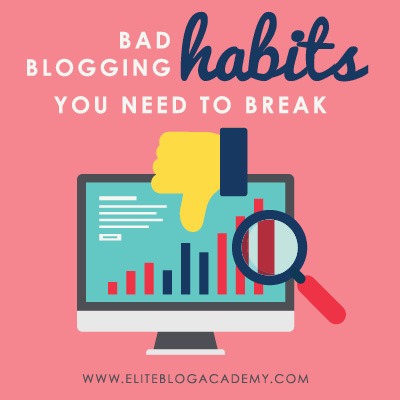 Habits. For better or for worse, we’ve all got them! Those behaviors we do completely automatically, over and over, without thinking about them.

Once something becomes a habit, it is almost like our brain goes on autopilot. We don’t have to decide to participate in a behavior. We just do it.

Now, when we’re talking about good habits, the “autopilot” mode is awesome. We’re productive and getting important things done — and we don’t even have to think about it!

But when we’re dealing with bad habits? Not quite so awesome. 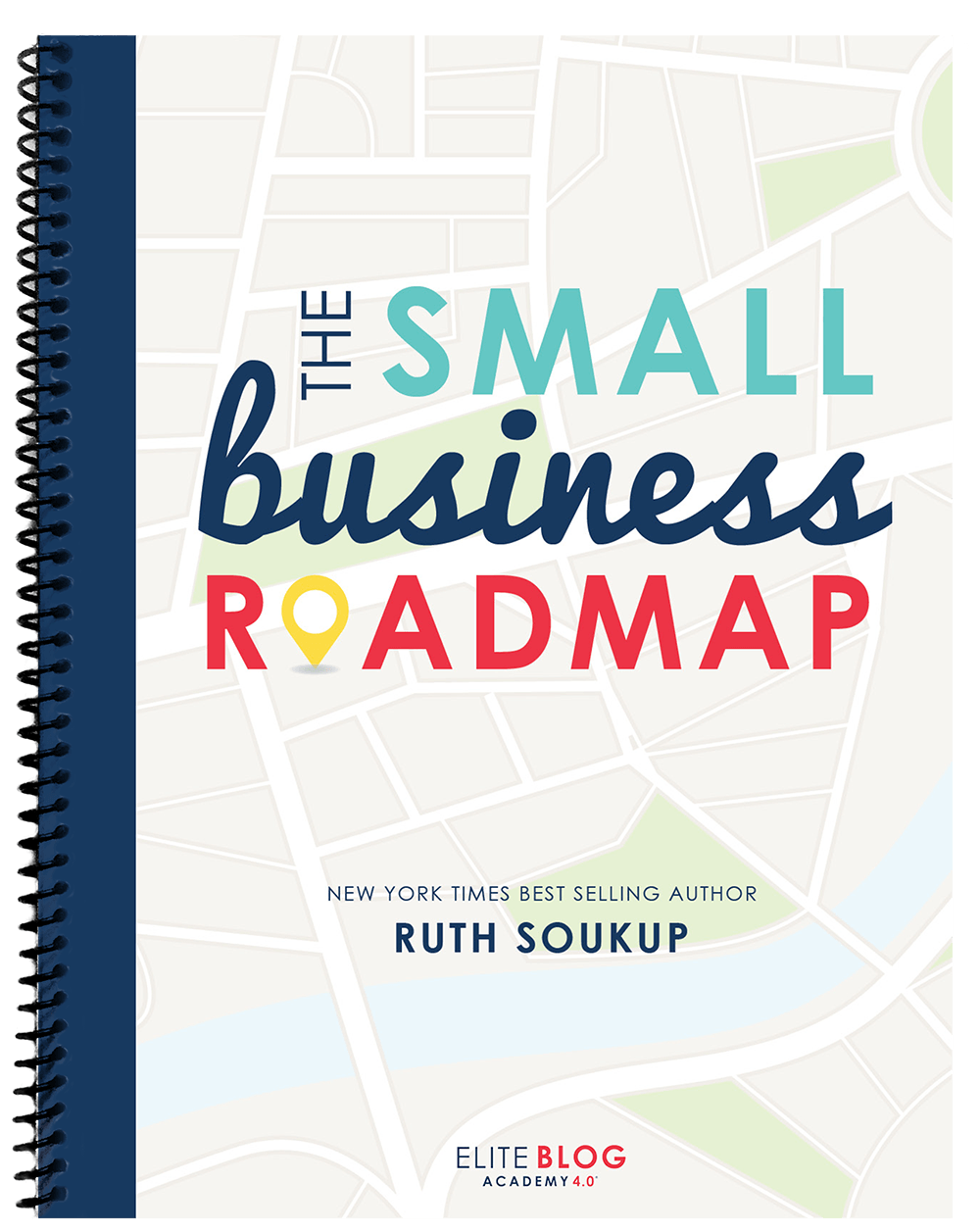 Thinking about starting your own online business? Our Small Business Roadmap will show you exactly what steps you'll need to take to get started, along with typical startup costs. Best of all, it's completely free! Simply click to download.

The Difference Between a Misstep and a Bad Habit

Habits hold us back.

Now, just because you make a misstep on your blog doesn’t mean you’re falling into bad blogging habits. NO ONE is perfect, and there will be times on your blog when you take a wrong turn and get off course. But those one-off challenges can be opportunities for growth — as long as we don’t let whatever caused the challenge become a habit.

Habits are not one-off missteps. Instead, they’re negative behaviors that happen over and over again, and they have a sneaky way of sabotaging our success. Habits hold us back. Because they’re automatic, not only are they harder to break, but sometimes we don’t even realize we’re doing them!

But it’s not hopeless! Bad habits CAN be broken. It just takes a little work.

So what are some of the worst of the bad blogging habits? And how can we get rid of them once and for all?

Everyone has their own set of habits — both good and bad — but some bad blogging habits are more universal than others.

Facebook is a HUGE time-suck disguised as a productive way to spend our time. It’s so easy to get caught up chatting with other bloggers in Facebook groups, thinking we’re getting somewhere… Until we realize a few hours have passed and we’ve accomplished zero things.

Spending too much time on Facebook is not what we want to focus on. Even though it might feel like we’re being productive, it’s keeping us from what’s important.

Want to spend less time on social media? Here are some ways to declutter your Facebook feed that will ultimately help free up your time and declutter your mind!

It’s important to know our stats so we can optimize our blogs. But compulsively checking stats is a bad blogging habit that needs to GO. Checking our stats ten times a day leads us to obsessing over page views — instead of applying that energy to get stuff done.

Email is such a tricky beast. It tricks us into thinking we’re getting work done, but it’s really just occupying our time with busy work. Instead of doing what we need to do (or what we want to do, for that matter!), we’re reacting to the emails in our inbox.

Checking email first thing in the morning starts our day off from a reactionary place instead of a purposeful place.

It’s no secret that I’m a big fan of planning. And that’s because planning ahead sets us up for success. Procrastination… not so much.

If we know we need to publish a blog post every Tuesday, and we wait until Monday night every week to start writing, we’re dealing with a procrastination habit that’s holding us back from reaching our full potential.

Overdoing It on Research

Research is good. Overdoing it on research is not.Click to Tweet

If we dig hard enough, we’ll always be able to find another blog post that’s covered our topic or another blogger we think is doing “better” than us. But that comparing game doesn’t help us. The only thing overdoing it on research does, is stop us from moving forward.

As we all know, blogging is about more than writing great content. There’s all sorts of behind-the-scenes stuff — like SEO, adding and optimizing images, or adding meta tags — that needs to happen for our posts to perform their best.

But for whatever reason, a lot of people get into the habit of skipping all that stuff. As a result, our blogs don’t do as well as they could.

Being Overly Critical of Ourselves or Others

Being overly critical — whether it’s of ourselves or others — is a fast track to feeling terrible. But for whatever reason, we still do it!

Criticizing others (“I can’t believe she sent another email!” or “Oh, that new product they launched is just terrible!”) or ourselves (“This is never going to work” or “I can’t do anything right!”) does zero good things for ourselves or our blogs. That overly critical dialogue is like a poison. It is a bad blogging habit that can seriously hold you back.

We can always find an excuse for why we didn’t get something done or why something isn’t working as well as we’d like. But making excuses doesn’t get us anywhere, and if we’re in the habit of making an excuse when things go wrong instead of taking responsibility, we’ll never get to where we want to go.

What Happens When We Can’t Break Our Bad Habits

I get it. (Oh do I ever!) Bad habits can be SO hard to break. But there’s a lot on the line if we don’t break them.

If we don’t overcome our bad blogging habits, they hold us back. They stop us from taking action, from reaching the next level, from getting to where we want to go.

And most importantly, they prevent us from ENJOYING our blogging businesses. Those bad habits will suck the positivity right out of blogging, leaving us feeling tired, resentful, and overwhelmed.

But don’t worry! Even if you’re drowning in a sea of bad habits right now, there IS hope.

How to Break the Blogging Habits Holding You Back

Breaking a habit might be a challenge, but it’s not impossible.

Be Honest With Yourself About Your Habits

The first step to breaking a bad habit is being honest with yourself about what’s going on. Because you can’t change something you’re not willing or able to see.

I know it can be really hard for me to recognize the areas where I’m falling into bad habits, but it’s SO important if I want to change them.

Take a good, hard look at your behaviors, and be really honest about which habits are holding you back.

Once you’ve identified the bad habits, it’s time to identify the triggers that are setting those bad habits into motion.

Once you’ve identified your triggers, you can remove them, which will remove the cue to participate in your bad habit.

Get Intentional About Replacing Your Bad Habits With Good Ones

Removing the triggers isn’t enough to kick bad habits to the curb. If you really want to get rid of your bad habits for good, you need to get intentional about replacing those bad habits with good ones.

If you’re the type of person to check your email first thing in the morning, replace that with an hour of writing. Or if you have a tendency to beat yourself up every afternoon, set an alarm on your phone that reminds you to review your wins for the day (I do this every day at 3:30 p.m., and it’s SO helpful in keeping a positive mindset!).

Take every bad habit or behavior and replace it with a good one. It’ll take some time, but eventually those good behaviors will become just as automatic as the bad ones — and instead of having a bad habit that’s holding you back, you’ll have a good habit that’s pushing you forward.

Be Kind to Yourself

Last, but certainly not least, be kind to yourself. Breaking bad habits is HARD. We all have moments when we’re guilty of slipping back into bad habits we know aren’t good for us.

But it’s okay! If you find a bad habit is trying to make a comeback, don’t beat yourself up. Just recognize it and move forward.

We all have habits, both good and bad. But when we deal with the bad blogging habits that are holding us back, we free ourselves to develop new, better habits — the kind of habits that will take us from where we are to where we want to go.

Want to adopt more good habits, not just in blogging, but in other areas of your life? Here are 10 Simple Habits to Adopt that will change your life!

Registration for EBA® will open in March 2020, for 5 days only. Join the waitlist now to stay updated!

Seeing Good in the Darkest Moments with John O’Leary